News on the vaccine front remains finely balanced. Preliminary results from Israel, which has been leading the vaccine roll out, has shown very promising results on both critical illness and transmission. At the same time, the efficacy of the current vaccines against new strains or variants of the virus has been much lower than expected. Although the science allows for new formulations that can target the variants better, it does take time, which means the world continues to work hard to stay ahead of the evolving covid-19 virus.

The oil price hit a 13-month high in February as a cold snap hit the United States. Texas, home to the Permian Basin, one of the largest petroleum producing areas in the world, experienced arctic temperatures, which resulted in a decline in oil production of an estimated 2 million barrels a day or a fifth of US refining output. This came after OPEC+ already tightened supply a month earlier. Gas production was also severely disrupted, leaving the grid with “rotating outages’ and customers without heating and power. 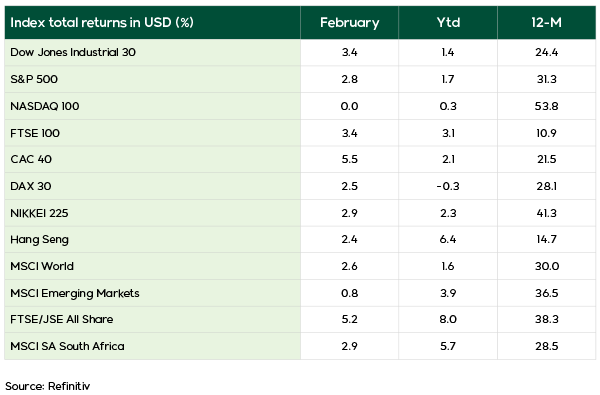 Equity markets across the globe strengthened, despite increased volatility towards month end. The S&P 500 gained 2,8% over the month, with technology heavy Nasdaq delivering flat returns. Emerging markets gained a marginal 0,8%, while the MSCI World index added 2,6%, benefitting from strong US gains. In contrast, bond markets across most categories and regions were hard hit by increasing bond yields. In US dollar terms, the Barclays Global Aggregate Index declined by 1,7% while emerging market debt weakened by 2,6%.

Manufacturing production around the world has remained resilient, despite continued measures of restriction and supply chain disruptions. This has helped mitigate the impact from weaker services sectors and is one of the reasons for more robust economic data in the last months of 2020. Notably, China’s fourth quarter GDP exceeded expectations, leaving the country with 2020 economic growth in positive territory at 2,3%.

Resilient manufacturing has supported higher commodity prices, while an improvement in global activity, alongside supply constraints, has driven the oil prices close to pre Covid-19 levels, translating into higher fuel prices. Vaccine rollouts and fiscal support have also spurred confidence and in some cases improved consumer spending. In January, US retail sales recorded its strongest gain in 7 months. More seem to be on the cards, if President Biden gets his stimulus plans passed.

It is therefore unsurprising that global bond markets have started pricing for economic recovery, but also a picture of reflation or increasing inflation - both from a low base created by 2020. The pace of change has been rapid and has accelerated sharply over the last month. 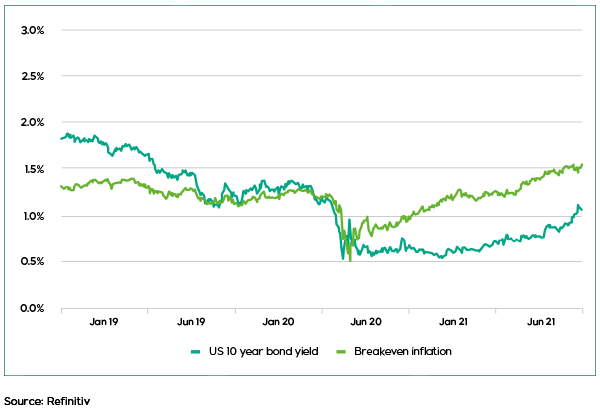 The US 10-year bond yield briefly traded above 1.6% in February, having started the year at 0.9%. Future inflation expectations are being priced in excess of 2%. These moves tend to spill over into global bond markets. Central banks have cautioned that economic repair is still underway, and inflation is set to moderate after peaking in mid-2021 due to base effects. The risk of rising inflation will likely remain as prominent as the volatility it is creating in markets. 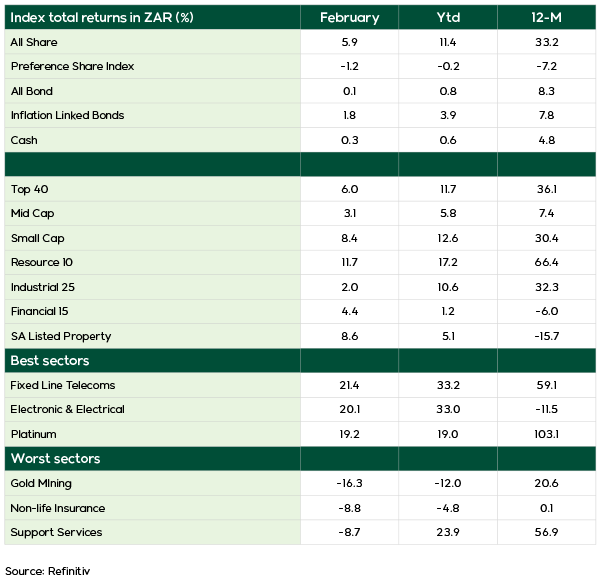 The 2021 State of the Nation Address (SONA) sought to balance immediate challenges from the pandemic with the difficult task of reviving an economy that was already in dire straits going into the crisis. Rather than reiterate the long list of reforms required to change the economic trajectory, the speech focused on the four most critical economic reform priorities. While the focus was welcomed, execution remains the key demand from stakeholders. Naturally and most pressing, more information on the vaccine procurement and rollouts were high on everyone’s priority list, with questions of how these would be funded.

The 2021 National Budget walked an equally tight rope, balancing the need to support while demonstrating fiscal prudence. A combination of higher commodity prices and a decent economic recovery over the latter half of 2020, left the Finance Minister with circa R100bn of additional revenues relative to the Medium-Term Budget estimates. While the deficit and debt ratios are still well in excess of comfortable levels, the outcome of the National Budget was better than the market expected and allowed the funding of vaccines and extended COVID relief measures without additional direct taxes outside of the usual increases in the fuel levy and excise duties. The Rand and local markets gained in the aftermath, although the headwinds from global bond yields erased much of this windfall by month end, with the All Bond Index returning only 0,1% in February. Inflation linked bonds benefitted from the prospects of reflation, returning 1,8% over the month.

Local risk assets continued in strength. The FTSE/JSE All Share Index gained 5,9%, benefitting from strong performance from the resources sector (11,7%). All subsectors delivered positive results, with the platinum sector up 19,2%, except for the gold miners, which declined by 16,3% over the month. The Small Cap index returned 8,4% relative to headline numbers from the Mid Cap stocks (3,1%) and the Top 40 (6,0%). The property sector recovered by a healthy 8.6% in February, with strong performance from Capco (26,0%) and Redefine (24,3%).

On the last day of the month, President Ramaphosa announced the progression to alert level 1 and procurement of a further 2 million doses of the Johnson & Johnson vaccine, bringing the total amount secured from J&J to 11 million doses. This comes a day after the company received emergency-use authorisation for their vaccine from the FDA. A step forward for the country’s SONA goal to “defeat the coronavirus pandemic”. 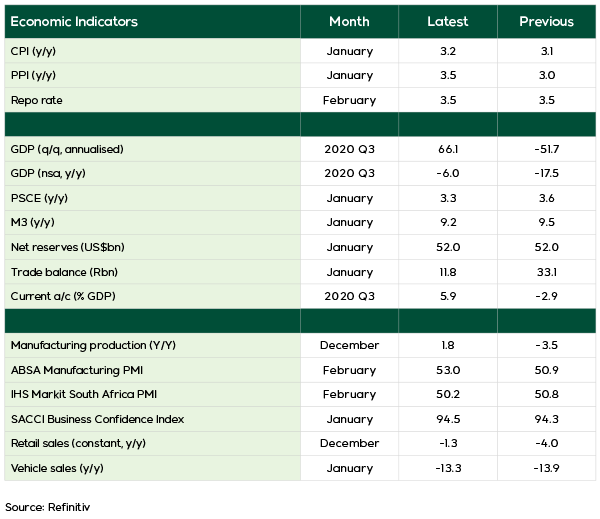