When registering and using the secure websites
When you register to use our online secure site investment services (South Africa –  https://nedgroupinvestments.nedbank.co.za or International - https://ngi.nedsecure-int.com) we will ask you to provide standard identification information about yourself for security, identification and verification purposes.

Five years ago, we wrote an article about the Effects of early withdrawals on retirement saving.

Despite many financial advisors commending us for highlighting the risks of accessing retirement fund savings prior to reaching retirement, it is somewhat surprising how many retirement fund members still access their retirement benefits before retirement without fully understanding the effect of such withdrawal from a tax point of view.

In the previous article we mentioned the obvious effect of an early withdrawal being the reduction on your retirement savings and therefore your ability to provide a sustainable alternative income after your retirement.

However, there is also a lesser-known effect (also mentioned in the article), which is how you are penalised from a tax perspective when you decide to access your retirement benefits prior to retirement.

The tax-effects of early withdrawals
As previously mentioned withdrawal benefits taken in cash after 1 March 2009 have the net effect of reducing your tax benefits at retirement.

If you take R100 000 as a withdrawal benefit when you resign from employment, then this means that the R500 000 tax free portion (see table below) on your lumpsum that you would have received at retirement would be reduced by the R100 000 withdrawal, leaving you with R400 000 tax free. 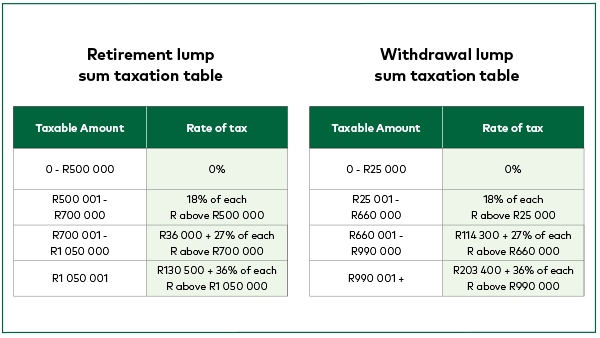 In real life: How early withdrawals sabotage retirement savings
Liam resigns from employment on 01/06/2015 and was a member of his employers’ retirement fund. He is contemplating either taking R1 050 000 as a lumpsum or simply preserving all of his retirement savings. Let’s look at the consequences of both decisions from a tax perspective:

Liam then retires from his current retirement fund on 30 June 2019. Let’s look at the effect of his earlier decision in 2015 on tax payable on his current lumpsum at retirement:

The net effect
• In Option 2(a) Liam saved himself having to pay an additional R94 500 by choosing not to access a withdrawal benefit of R1 050 000 on resignation. Liam had the added advantage of tax free growth on the amount not taken, as growth in a retirement fund is not taxed.
• However, in Option 2(b), assuming all future income received by Liam from his compulsory annuity falls under the tax threshold, Liam will pay no further tax. This would then mean that Liam managed to reduce his tax liability by a massive R463 500.

Obviously the greater the income Liam takes from his compulsory annuity, the greater his income tax liability - but the point of this article is to highlight the importance of understanding the tax consequences of taking an early withdrawal from your retirement savings as well as the importance of sound financial planning at retirement.