Both our shorter-term monetary analysis and longer-term cycles work shifted to a positive view of the global economic and market outlook in Q2 last year - conditional, of course, on virus developments.

Emerging market equities and other cyclical assets were expected to do well. The cycles analysis remains positive but monetary trends suggest a temporarily less favourable backdrop. We have, accordingly, turned more cautious on near-term market prospects but would view any setback as another opportunity to add exposure to reflation themes.

According to our cycles analysis, the stockbuilding and business investment cycles reached major lows in Q2 last year, while the longer-term housing cycle remains in an upswing from its 2009 now. All three cycles, therefore, are now acting to lift global economic momentum. Another cycle low (stockbuilding) isn't due until around late 2023, with the downswing into that low likely to start about a year earlier. The analysis, therefore, is giving an "all clear" for the global economy through H1 2022. Similar cycle set-ups historically have been associated with EM equities outperforming developed markets.

The cycles argument is independent of but reinforces economic optimism based on DM monetary / fiscal stimulus and the release of pent-up demand as vaccine rollouts allow economic reopening.

So why consider dialling down on cyclical exposure currently? There is, admittedly, a risk of trying to be "too clever" and missing out on gains as a medium-term reflation scenario continues to develop. There are, however, three near-term reasons for caution.

First, our key global monetary indicator - six-month growth of G7 plus E7 real narrow money - has fallen steadily from a July 2020 peak and usually leads markets and the economy. We think the global manufacturing PMI may have peaked out temporarily around end-2020, a development that could arrest a rising trend in Treasury yields and act as a drag on cyclical assets - see chart 1. Secondly, the Chinese authorities withdrew monetary and fiscal support during H2 2020 and money / credit growth has fallen back, following a more muted prior pick-up than in the G7 - see chart 2. Economic news could disappoint in early 2021 and the PBoC may need to ease - rather than tighten, as most expect - to get momentum back on track. This could be a problem for EM equities - China's weight in the MSCI EM index is up to two-fifths - and the cyclical reflation trade more generally. A dovish PBoC policy shift could be a signal to add back cyclical exposure. 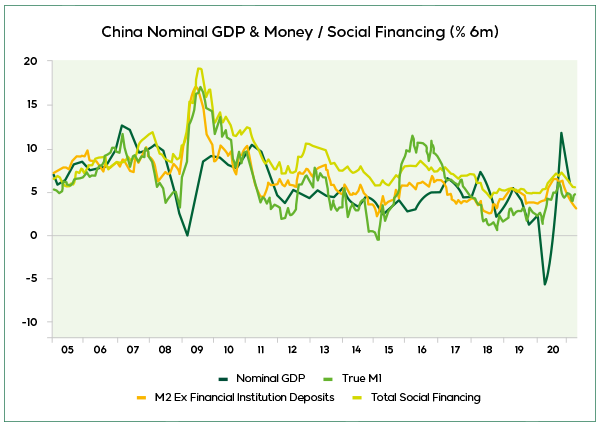 Thirdly, the outperformance of cyclical assets in late 2020 was aided by US dollar weakness but bearish positioning in the US currency now looks extreme, while the US election results and associated prospect of additional fiscal stimulus suggest stronger growth prospects than in other major countries, with implications for relative monetary policies. A US dollar recovery could be another near-term dampener on cyclical and EM enthusiasm.

We added exposure to cyclical EM markets and stocks (i.e. those historically displaying a positive correlation with global economic momentum) in Q4 but, reflecting the above considerations, are inclined to reduce positions in Q1, though intend to stay overweight barring a further deterioration in global / Chinese money data. The outperformance of Chinese equities in 2020 rested on successful virus containment rather than relative monetary conditions, raising the possibility of payback in 2021 unless the PBoC surprises with an early injection of stimulus. We are also underweight "liquidity-sensitive" markets characterised by a negative historical correlation with US Treasury yields, such as Mexico and South Africa. A stabilisation of yields could help relative performance but any relief would probably prove temporary and money growth is relatively weak in these two countries.