Our previous quarterly commentary suggested that the monetary backdrop for EM equities and other cyclical assets was becoming less favourable.

Emerging Market equities continued to rise strongly into mid-February but gave up most of the gain later in the quarter, underperforming developed markets. Our indicators remain cautionary for the second quarter but there are reasons to expect improvement into the second half of his fiscal year, – any significant market weakness, therefore, could present a buying opportunity. Chinese monetary policy will be key to adopting a more positive view.

Emerging Market underperformance since mid-February is consistent with this story, but the global manufacturing new orders index reached a new recovery high in March. We maintain that the index is peaking and will subside into H2. Variation around the 6-7 month average lead is normal and March strength was due to European components, which often lag the US (stable) and China (weaker). Global six-month real narrow money growth, meanwhile, continued to slow in early 2021 – see chart 1. 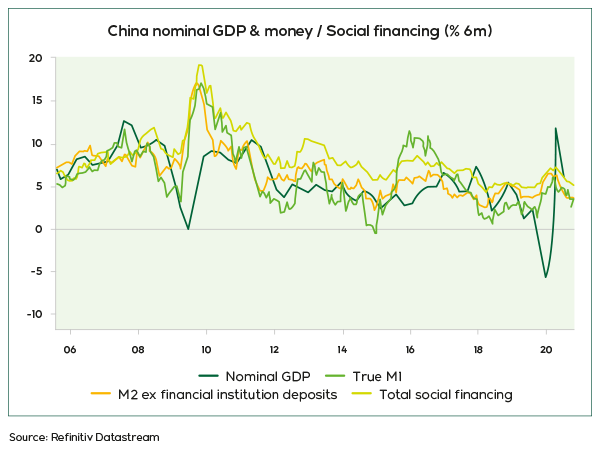 Our second concern was that Chinese monetary policy had become over restrictive from mid-2020. Relatively weak and falling six-month money growth in H1 suggested that the Chinese economy and equities would disappoint in 2021 unless the PBoC changed course. Instead, policy remained on hold in Q1 and money / credit growth softened further – chart 2.

A third worry was that US dollar sentiment and positioning had become excessively negative at a time when relative money trends were becoming more supportive (i.e. US money growth was slowing relative to elsewhere). This suggested scope for a dollar rally, with negative implications for Emerging Markets.

These reasons for concern remain in place, warranting retaining a cautious strategy for Q2, in our view. We are, however, inclined to think that our assessment will improve in H2, implying that any significant near-term market weakness could present an opportunity to add exposure.

Global money trends are key. Six-month real narrow money growth, as noted, fell further into February but there are reasons for expecting a subsequent recovery: base effects are turning more favourable and disbursement of fiscal stimulus should boost US money numbers. A revival in real money growth from March would suggest stronger global manufacturing PMI new orders from September-October.

There is, meanwhile, a reasonable chance of a dovish shift in Chinese monetary policy during Q2. The official aim is to keep money growth in 2021 in line with nominal GDP growth. With real GDP growth and CPI inflation targets of “6% or more” and “around 3%” respectively, this suggests M2 expansion of 9-10%. Year-on-year M2 growth fell to 9.4% in March and we estimate that the six-month underlying rate of increase is running at less than 8% annualised. Further soft monetary data in April / May, therefore, could catalyse a policy shift.

Inflation trends are consistent with easier policy: core CPI Inflation is only 0.3% and a surge in PPI inflation reflects raw material price increases, which are squeezing downstream margins. The PBoC, however, is likely to require evidence of a slowdown in the housing market – recent data have raised concern about renewed speculation despite prior efforts at containment, possibly due to a diversion of activity from a cooling stock market.

The US dollar could rally further in Q2 but negative sentiment and positioning are less extreme than at the start of the year – chart 3. A rise in US money growth relative to other major countries, moreover, could act as a headwind later in 2021, echoing experience in H2 2020. 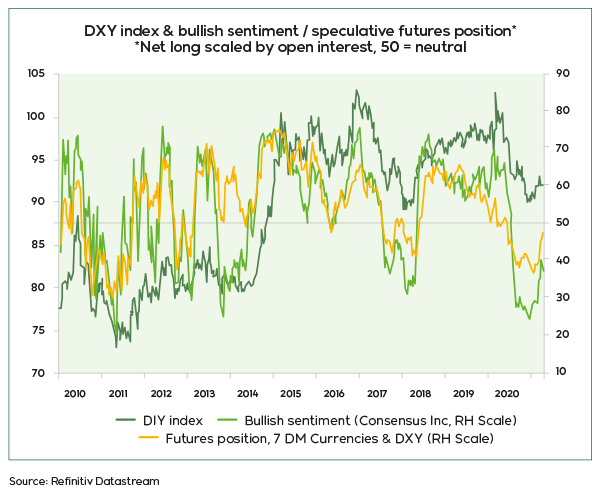 Our expectation of a near-term cooling in global / Chinese industrial momentum suggests limiting exposure to “old economy” cyclical sectors in favour of defensive sectors. Such a shift, however, is more compelling in developed markets, where cyclical sector valuations relative to defensives have risen significantly and are above average – there has been no such rerating within Emerging Markets.

The prospect of a near-term economic slowdown also suggests dialing down exposure to Emerging Market countries with economies / markets geared to global growth. The complication here is that candidate markets that have outperformed, such as Taiwan and Korea, appear to have support from strong domestic money trends. Other cyclical markets, such as Brazil, have underperformed relative to previous global upswing phases because of political and / or covid developments. Such markets are candidates for upgrades later in the year if the more optimistic H2 scenario described above plays out.

Relative money trends argue for remaining underweight China pending a PBoC policy reversal. Liquidity-sensitive markets that have underperformed as US Treasury yields have risen, such as the Philippines, Thailand and Indonesia, are possible beneficiaries if yields stabilise or retrace on softer PMI data. Narrow money growth has been strongest in Chile and is relatively high in emerging Europe – particularly Greece. South Africa and Mexico were resilient to higher yields in Q1, partly reflecting favourable covid developments, but money trends argue against adding exposure. 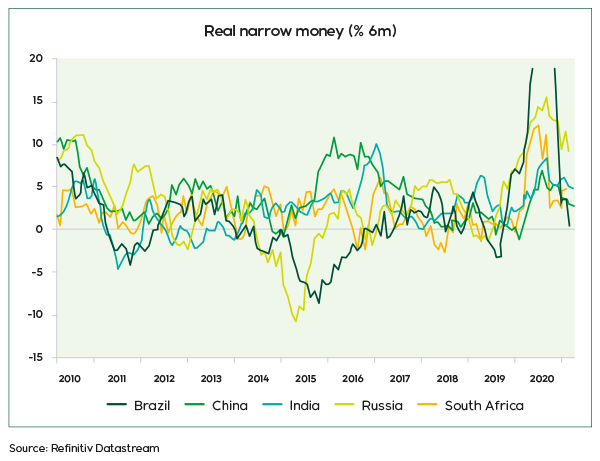 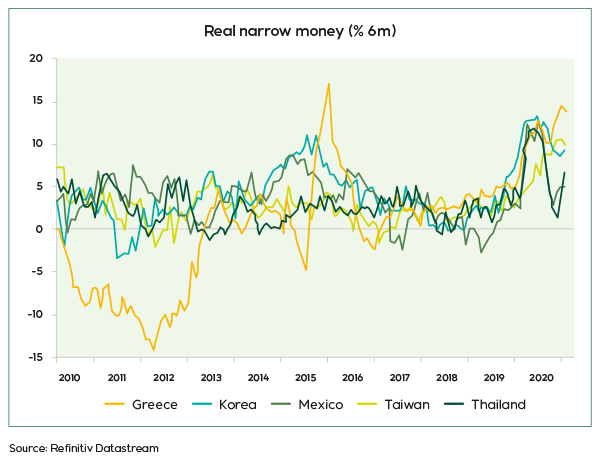