When registering and using the secure websites
When you register to use our online secure site investment services (South Africa –  https://nedgroupinvestments.nedbank.co.za or International - https://ngi.nedsecure-int.com) we will ask you to provide standard identification information about yourself for security, identification and verification purposes.

Income type fund fact sheets prominently publish the funds’ exposures to banks. Most investors have a tendency to treat debt issued by a bank as uniform – which begs the question: “Is all bank debt issued by a single banking entity equal?”

It’s a simple question but understanding the nuances of the answer has become crucial for investors in the current environment and due to pending regulation. To answer, we must begin by looking at the concept of leverage.

The concept of leverage is essential to banks. In contrast to industrial companies, banks need to be highly leveraged in order to generate an acceptable rate of return.

The downside to leverage is that it increases the risk of a bank.  The market recognises this risk, and investors will require a premium over their invested capital if a bank is too highly leveraged. Therefore, it might benefit a bank to hold a higher than required amount of capital, signalling confidence to the market and in turn potentially lowering its funding costs.

From an accounting point of view bank equity is simply the bank’s assets less its liabilities.  Bank assets are cash, government securities and various types of loans offered by the bank that earn interest (e.g. home loans, personal loans, vehicle financing).  Bank liabilities are any loans or debt obtained by the bank, including deposits by customers.  Bank capital consists of equity and it includes some loss-absorbing liabilities such as Tier 2 and Tier 1 paper.  Bank capital is considered from a regulatory point of view as the “equity” in the bank and therefore it is important to investors because it acts as a reserve against unexpected losses. It also protects creditors if the bank were to go into liquidation.

Bank creditor hierarchy – why all debt isn’t the same

It is important to recognise debt heterogeneity in a bank’s capital structure.  All types of debt issued by a counterparty will be ranked differently according to the risks rooted in these assets - such as how much the debt holders may lose in a credit event, or potentially, even prior to any credit event.   The figure below shows hierarchy of bank creditors.  The contractual or legal liability structure (seniority) determines how a bank’s assets and cash flows will be distributed upon default to its creditors. 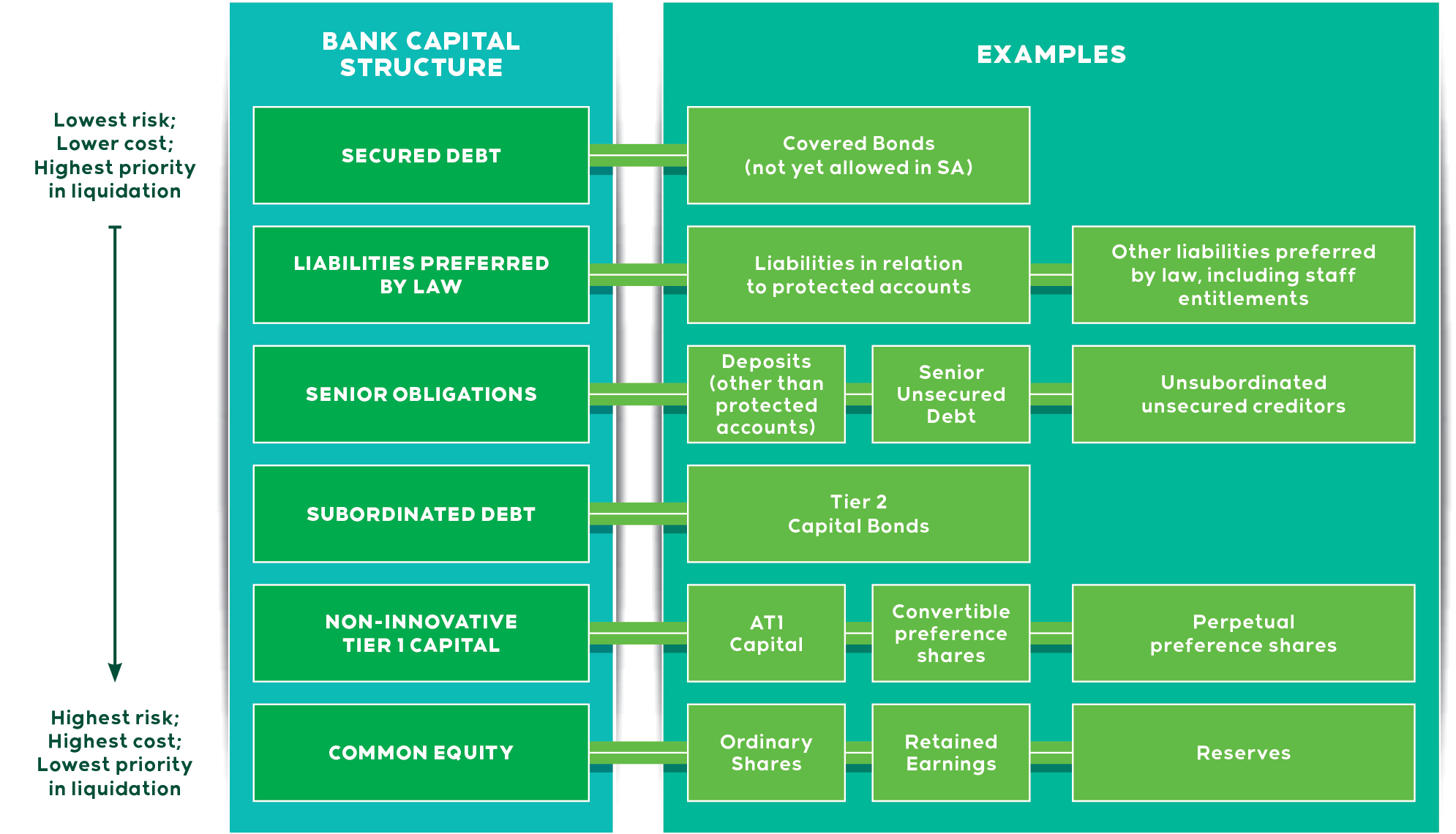 Equity holders bear the most risk in the bank.  Equity holders in a bank are entitled to profits and have unlimited growth potential.  Debt holders are exposed to limited upside while being exposed to default risk.  It is for this reason that debt holders rank above equity holders.  That said, banks have a complex capital structure.  This means their capital structures comprises of multiple types of debt with different levels of seniority.  It is therefore important for investors to know where their investment lies in the priority of payments.
Because banks are subject to regulation which requires them to hold excess amounts of capital to mitigate operational risks, they issue additional Tier 1 and Tier 2 instruments which are classified as regulatory capital.

What should you look for?

Many phrases are used when identifying seniority but the most common and obvious term to look out for is “subordinated”.  The term “subordinated’ means the debt you are holding ranks below more senior debt and is therefore riskier.  As a result of this higher risk, these instruments will pay investors a higher rate of return.  It is important for prudent investors to understand a bank’s capital structure to help justify the risk and return inherent in a fixed income investment and price appropriately.

So, what we’re saying is…

At the end of the day, risk is directly correlated to the return i.e. the holder of a riskier asset wants to be compensated for additional risk.   This is illustrated very simply below.

Looking forward: what happens if a bank fails?

Currently the Insolvency Act does not provide for a granular enough hierarchy amongst bank creditors.   That means there is no legal basis in which certain bank creditors (e.g. junior and senior unsecured creditors) are differentiated in a liquidation scenario.  This lack of hierarchy makes it hard to enforce a bail-in sequence, even if the Resolution Authority (RA) is provided with explicit bail-in powers.  As a result of this, a Resolution Framework to deal with this issue which will come into effect in the next few years.  Refer to Figure 2 for the proposed bail-in sequence being looked at currently by the banking industry in South Africa and abroad. 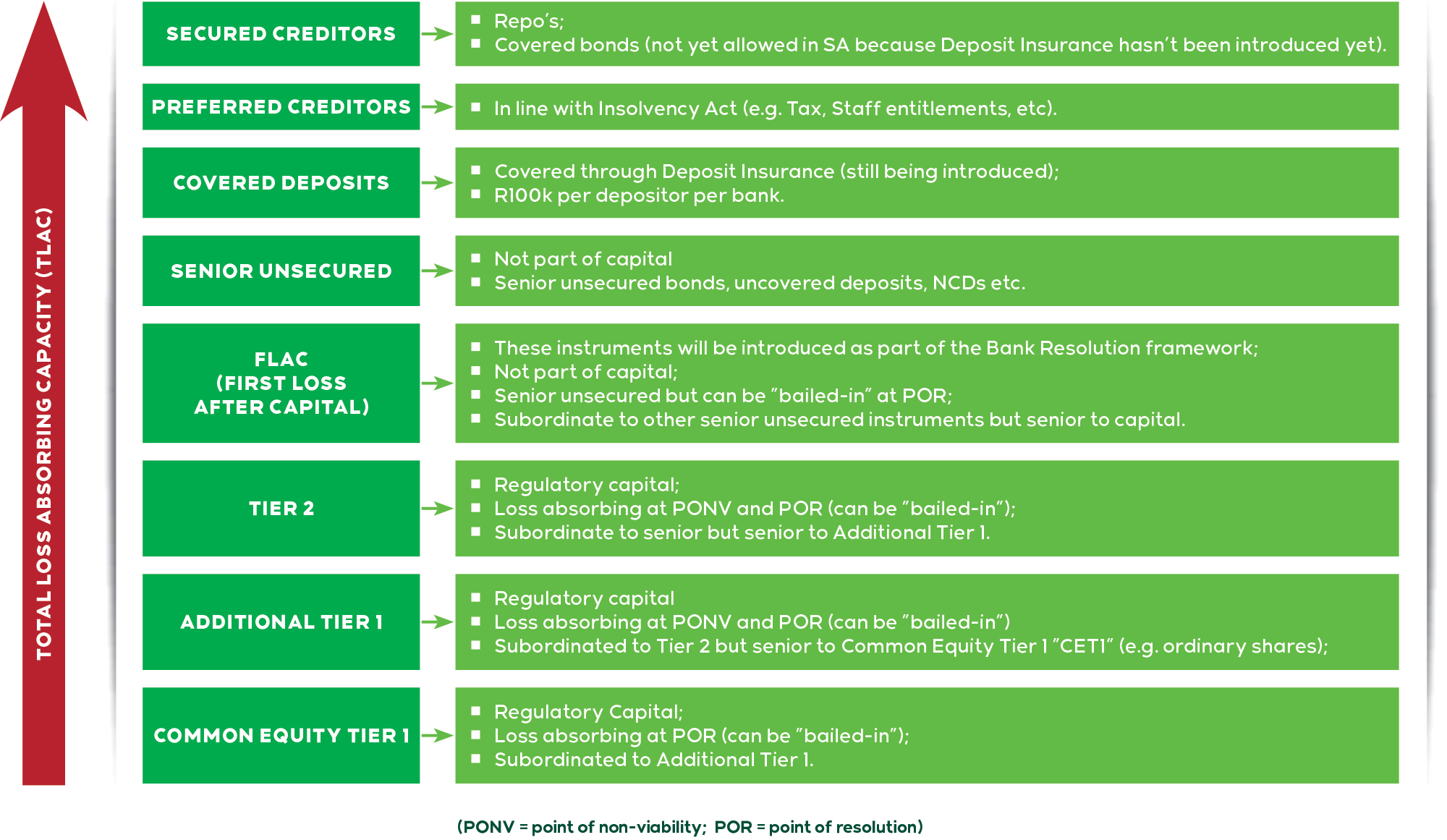 The resolution procedure is triggered when a bank is failing or is likely to fail.   It will make specific proposals on a minimum creditor hierarchy, which should serve as a guide to the bail-in sequence.  “The bail-in tool will therefore give shareholders and creditors of institutions a stronger incentive to monitor the health of an institution during normal circumstance” .  The too-big-to-fail burden will no longer fall on taxpayers as it did in the 2008-2009 Financial Crisis!

Understanding the difference between a bank issued instrument’s capital ranking to price the risk and assess the relative liquidity of each instrument under various market scenarios, is going to become increasingly important to investors. And not all paper issued by any particular bank is equal.